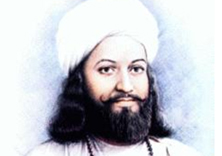 Sultan Bahu (also spelled Bahoo; Punjabi: سلطان باہو, ca 1630–1691) was a Sufi mystic, poet and scholar active mostly in the present-day Punjab province of Pakistan. He belonged to the Sufi order known as Qadiri, and the mystic tradition he started has been known as Sarwari Qadiri.

Little is known of Bahu’s life, other than a hagiography written by a descendant of his seven generations later, entitled Manaqib-i Sultani. Sultan Bahu was born in Shorekot, Jhang in the current Punjab Province of Pakistan. More than forty books on Sufism are attributed to him, mostly in Persian, and largely dealing with specialised aspects of Islam and Islamic mysticism. However, it is his Punjabi poetry which had popular appeal and earned him lasting fame. His verses are sung in many genres of Sufi music including qawwali and kafi, and tradition has established a unique style of singing his couplets.