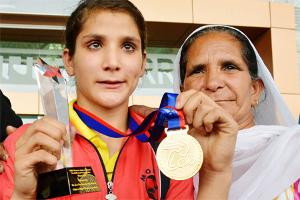 Mandeep Kaur from village near Ludhiana in Punjab won a Gold Medal, in “World Junior Boxing tournament” held in Taiwan. The locals of the village watched her live beating her Irish opponent and were screaming with joy and dancing, as she wins the Gold Medal. Mandeep is only class-12th student, and already has many national and international titles, but “World Junior championship” is the biggest one yet.
Harpreet Kaur (Cousin of Mandeep Kaur) said “The final had got us all very excited”. Her coach was sending us videos of the bout constantly. When her hand was raised, it was a proud moment for us.” The boxer’s mother, Daljeet Kaur, couldn’t watch these videos because of pending chores, but her ears were glued to the news coming in from Taipei. “I knew my daughter would make it,” she said. “Mandeep called us later and said: ‘I have won.’ A grand welcome awaits her on return,” said Harpreet Kaur.
The president of her first training academy said, “We have a plenty of international titles, but a world championship is like an Olympic medal to us, The girl’s indomitable spirit took her to victory. She started boxing in 2008 and since 2011 is getting us medals regularly.” said academy president Balwant Singh.
Overall, it was fantastic tourney for Indian boxers as they pocketed 7 medals in all – 3 golds, 1 silver and 2 bronze.
Mandeep’s father is a farmer and was unable to pay for her gloves and other training equipments, which eventually led to the Sher-e-Punjab Sports Academy sponsoring her cause.
Daljit Kaur, Mandeep’s mother said to a leading newspaper that Mandeep never missed her practice sessions and started her training sessions from 4 am sharp in the morning everyday.