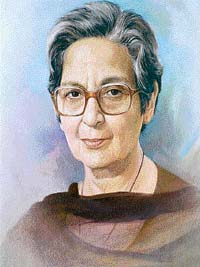 Amrita Pritam (31 August 1919 – 31 October 2005) was a Punjabi writer and poet, considered the first prominent woman Punjabi poet, novelist, and essayist, and the leading 20th-century poet of the Punjabi language, who is equally loved on both the sides of the India-Pakistan border. With a career spanning over six decades, she produced over 100 books, of poetry, fiction, biographies, essays, a collection of Punjabi folk songs and an autobiography that were translated into several Indian and foreign languages.